About the HVTT Forum: Brief history 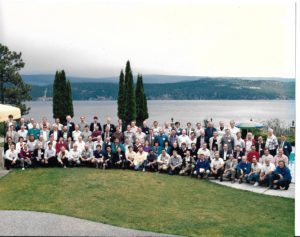 The first International Symposium on Heavy Vehicle Weights and Dimensions (HVWD) was held in 1986 to mark the completion of the three-year Canadian Heavy Vehicle Weights and Dimensions Study. At the time, this was the most comprehensive size and weight study ever undertaken and it produced the first set of performance measures designed to support the regulatory process. The Roads and Transport Association of Canada organized the first symposium. It was held in a mountain resort near Kelowna BC far from any metropolitan centre, capturing the delegates in close surroundings. The symposium was designed as a multidisciplinary event bringing together international experts in various fields of land transport. The synergy created during this event was remarkable and there was a strong consensus that a second symposium should be planned. HVWD2 was held in 1989, again in Kelowna, Canada.

In 1992, the third symposium (HVWD3) was held at Cambridge University, UK. It was at this symposium that the Forum was established, as described in the HVWD3 proceedings: “During the symposium a new organisation, tentatively named the ‘International Forum for Heavy Vehicle Weights and Dimensions’, was formed. The purpose of the organisation is to formalise and support the running of regular international symposia on heavy vehicle weights and dimensions and to facilitate information exchange between researchers, policy makers, regulator, road agencies and the transport industry.” Its first President was Byron Lord of the USA Federal Highway Administration. A short time later the organisation adopted its official name, “The International Forum for Road Transport Technology” (IFRTT).

The HVWD symposia continued to be held every three years, with HVWD4 in 1995 in Ann Arbor, USA, and HVWD5 in 1998 in Maroochydore, Australia, before switching to its current biennial format with HVWD6 in 2000 in Saskatoon, Canada. In 2006, it was decided to rename the symposium to  the “International Symposium on Heavy Vehicle Transport and Technology” (HVTT) to broaden the symposium’s scope beyond just weight and dimensions issues. Thus, HVTT10 was held in France in 2008. In 2019, the Forum itself was renamed the International Forum for Heavy Vehicle Transport & Technology (HVTT Forum) to better align with the name of the HVTT Symposia.

The full list of past symposia (with links to proceedings) can be found here. All of the papers presented at these conferences are available on the HVTT Forum website via the Library tab on the navigation ribbon.

The primary goal of the symposia is to bring together in close proximity the various disciplines of road transport to broaden knowledge and perspective. The following are example areas of interest for the symposia:

These symposia have provided a unique opportunity to discuss the technology, safety and policy aspects of transport technology. The purpose of the Forum remains to formalize and support the running of regular international symposia and to facilitate information exchange between researchers, policy makers, regulators, road authorities and the transport industry.

Since the Forum was established, there has been a vast tide of international research co-operation, European Commission COST projects and NAFTA activities in North America. The Forum has played a role in publicizing and presenting the results from these international activities and provides an on-going opportunity for the international networks developed in these projects (which have a finite life) to continue and flourish.

The current President of the HVTT Forum is Loes Aarts of the Ministry of Infrastructure and Water Management in the Netherlands. The full list of Board Members can be found here.